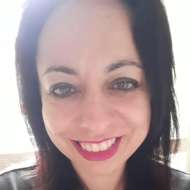 Filomena is an APPA-certified Philosophical Counselor. She graduated from the University of Trieste, Italy, which is a vibrant city home to the largest number of resident researchers in the country. It is also the city of Franco Basaglia, the psychiatrist who revolutionized the image and conception of mental distress.
Her approach to philosophical counselling is strongly influenced by Weak Thought, Postmodernism, Deconstructionism (e.g. Foucault, Deleuze, Derrida...), which is a view that favours a plurality of senses, truths, and meanings.

The title of her master thesis was "Knowledge, Truth and Illusion in Nietzsche's Thinking", a significant part of which was devoted to Nietzsche's positions against the principle of non-contradiction. In fact, she would like to develop a research project that compares Western Nihilism and some non-classical logics (for example Graham Priest's ‘dialetheism’) with Eastern philosophies such as those of the Japanese philosophers Nishida Kitaro and Miki Kiyoshi.

She is also an intermediate-level student of the Japanese language.

Currently, she works as a part-time teacher of Italian in a primary school, as well as constantly developing her knowledge and experience in philosophical counselling.

X
Chat with a Philosopher
Top